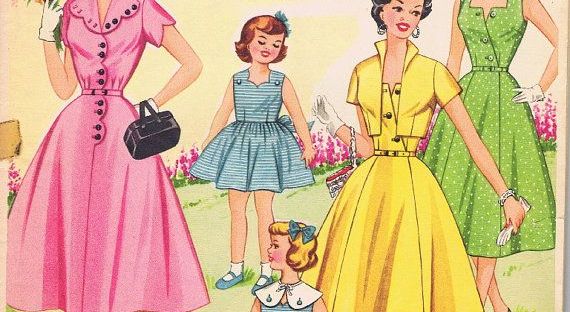 I’ve been slightly obsessed with the Draft at Home Systems that were popular between the 1920s to the late 1950s. As someone who self-drafts or has to resize vintage patterns, I fully appreciate the adventure of using these systems. I mentioned in a recent post that it is time for me to level up my sewing skills and I personally think that this is the way to to do it, not to mention, I can continue to customize patterns and garments to fit my body.

What are Draft at Home Systems you ask? These were generally patterns or pattern books sent via mail order or found in magazines. Many of the books would include a variety of patterns including women, men, children and occasionally household patterns. The systems would also assume that an experienced home seamstresses would be using the patterns. In most cases patterns would not include facings, pockets or even instructions. It was up to you to figure that all out. The patterns themselves would be considered easy enough for the sewist to draft themselves, as sewing was a skill that would be taught from generation to generation. In my opinion, it should still be a learned skill that everyone should know — but, I digress, that is for another post.

There are several different types of Draft at Home Systems, I am listing several below and if you are interested in trying them out yourself, I will include links for as many as I can. The first ones listed are the ones I will be trying soon. I will be posting about my adventures in using these systems and I hope you come along for the journey! As I find more drafting systems I will be sure to blog about them.

Haslam System Of Dress Cutting The Haslam System was very popular from the 1930s all the way to the 1950s, which is quite a feat as many other drafting systems would generally be popular for a particular period and fall out of popularity when a newer, better system was created. I plan on making the green dress that is in the illustration below. I’ve wanted to make more 1930s fashions, but the sizing generally doesn’t fit me. With the actual Draft at Home System I can customize the pattern and garment to fit my measurements!

The Etsy store My Vintage Wish has quite a few Haslam patterns available.

Mrs. Depew Many of Mrs. Depew’s patterns are from a French pattern drafting system fairly similar to the Lutterloh golden rule patterns. Thought the site doesn’t say which I am taking a wild guess that it is Eclair Coupe Paris. Though Mrs. Depew isn’t an actual drafting system, I am including it here as there are a lot of Draft at Home System patterns on her website. I feel like her website is also a great resource.

Sewists will be able to draft patterns to their exact sizes from the miniature pattern template and specially designed rulers. If you need help with drafting your pattern, Mrs. Depew has a really handy blog post about it.

Enid Gilchrist Enid Gilchrist was an Australian fashion designer, who became well known for her numerous self-drafting sewing pattern books which were very popular in the 1950s to 1970s. The pattern book I have has a great selection of dresses and I can’t wait to make one of the day dresses!  If you want to purchase a book Subversive Femme over on Etsy has two.

In addition to these three systems I have a few more I want to try out. I have listed those below with other drafting systems that are out there! These are just a few, there are so many more systems. The ones I am interested in are from 1900 to the early 1960s. I am always on the hunt and my goal is to try to make at least one garment from as many of the systems as I can.

Italian Drafting System Elegantissma was an Italian drafting system that was popular in the mid to late 1950s. If you want to buy one of the magazines, you can find them here.

Lutterloh Lutterloh is a German Draft at Home System and it is still used today. (http://www.lutterloh-system.com/)

Choosing and making your own patterns, is the ideal way to create your individual style and achieve consistently proper fitting garments. The Lutterloh pattern making system is the perfect solution for today’s busy sewer.

Fashion conscious sewers from around the world have been using the Lutterloh method for decades, beginners and professionals alike. This system is quick and easy to learn.

Astonishingly simple, you need only two measurements to make an excellent fitting pattern every time.“ www.lutterloh-system.com

Eclair Coupe Paris This system was developed in the late 20s. I’ve compared it to the other pattern systems I have and I am finding this one quite easy to follow. I like that you get handy paper rulers that go up to very large sizes. I have also found instructions on how to make my own rulers if need be.

Glass of Fashion has a lovely selection of patterns.

Magazines A large variety of women’s magazines would contain either knitting, crochet or sewing patterns. I’ve listed a few below.

Behind the deceptive smile waits the child of darkness! Never trust a girl in pigtails! View all posts by Lizzie Violet

1 thought on “Draft at Home Systems”

Find me on Ravelry!

Vintage, Sewing, And Everything Else I Can't Live Without

the life of a wannabe princess

Where we're always ready for our close-up.

Meet Me at the Soda Fountain

because my fingers itch...

A group of the Toronto Vegetarian Association

Americans' daily coffee ritual... Come right into our friendly, rhythmic ambiance, It’s a communal enjoin where you can always explore our breakfast, brunch and coffee selections.

The Pretty and The Kitsch

Vintage films, books, sewing, womanhood and everything in between

Musings of a mid century girl

I travel for vegan food ✈︎

Two gals and their adventures in the past

Some Girls Wander by Mistake

Dissecting the things that go bump in the night.

Miss Back In The Day USA

Remembering where we have been and our experiences as a nation

Fun and easy recipes for a plant-based lifestyle

Keeping it vegan in the dairy state.

My Kingdom for a Hat

The Knitting Adventures of an Expat in The Middle East

A vintage fashion and sewing blog, from a seaside-dwelling seamstress & writer.

Exploring the the Big Unknown

Nest and Glow
words with cowbell

Your multi-use park in Roncesvalles/Parkdale/Brockton, Toronto

. . where the worlds of film noir and pre-code collide . .

Freed from the past her life is now all about the art and the adventures.

Creating a beautiful life, one stitch at a time